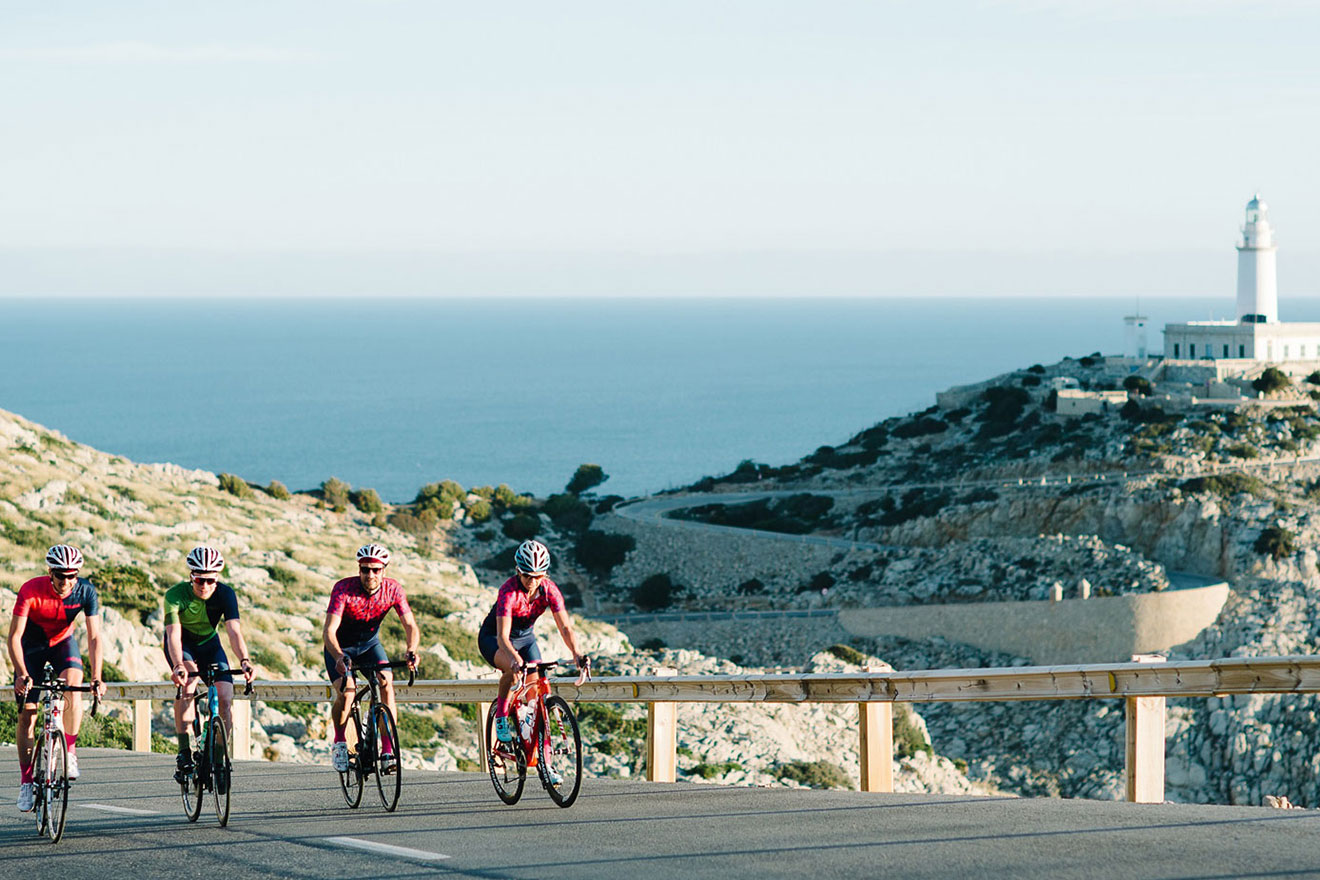 Mallorca Routes and Climbs not to be missed

To get full value from your trip to cycling paradise

Andratx to Port Pollenca
If you are only ever going to ride one more route in your life, this would probably be it. Choose between return distances of 115km to 162km with 2400m to 4300m of climbing. Coastal and forest views, quaint villages, excellent surfaces. This one will make your year. Take a bike bus from Mallorca Cycle Shuttle to the start and ride back from Andratx.

Cap Formentor
Regularly ranked in the top 20 routes in the world. A very scenic and hilly ride out to the most northern point of Mallorca, the lighthouse at Cap Formentor from Port de Pollença. The surface is great now all the way having been replaced in October 2014 from Formentor beach. Take care when entering the short but dark tunnel. We recommend riding here early in the morning, then you will see one other cyclist and some goats – come later and there will be more traffic.

Bay of Pollença
Port Pollenca – Cap Formentor – Alcudia – Bonaire – La Victoria – Port Pollenca. Thought you would just do Cap Formentor, then back to Port Pollenca? Add this extra section and ride right around Pollenca Bay. Stunning. La Victoria surface is not great (unless you are from the UK then it is probably excellent in comparison!) and not up to normal Mallorcan standards but worth it to experience the views back across the bay.

Port de Pollença to Andratx
Choose a route of between 115km and 162km for an epic day on the bike. This route follows the famous ma-10 road which goes right through the heart of the Serra de Tramuntana and can includes a winding detour down to Sa Calobra port. Coastal and forest views, quaint villages, excellent surfaces. This is either the best or second best route on the island, the reverse route, Andratx to Port Pollenca is the competition.

3 Monasteries Epic
An epic route, covering 3 excellent climbs with unmatched views. 182km with 2,800m of climbing. Starting with San Salavador, through Felanitx, Son Mesquida, Porreres, Puig de Randa, Montuiri, Sant Joan, Petra, Son Servera and Arta. Up Ermita de Betlem and back to Arta, then onwards through Can Picafort, Alcudia and finally back into Port Pollenca. 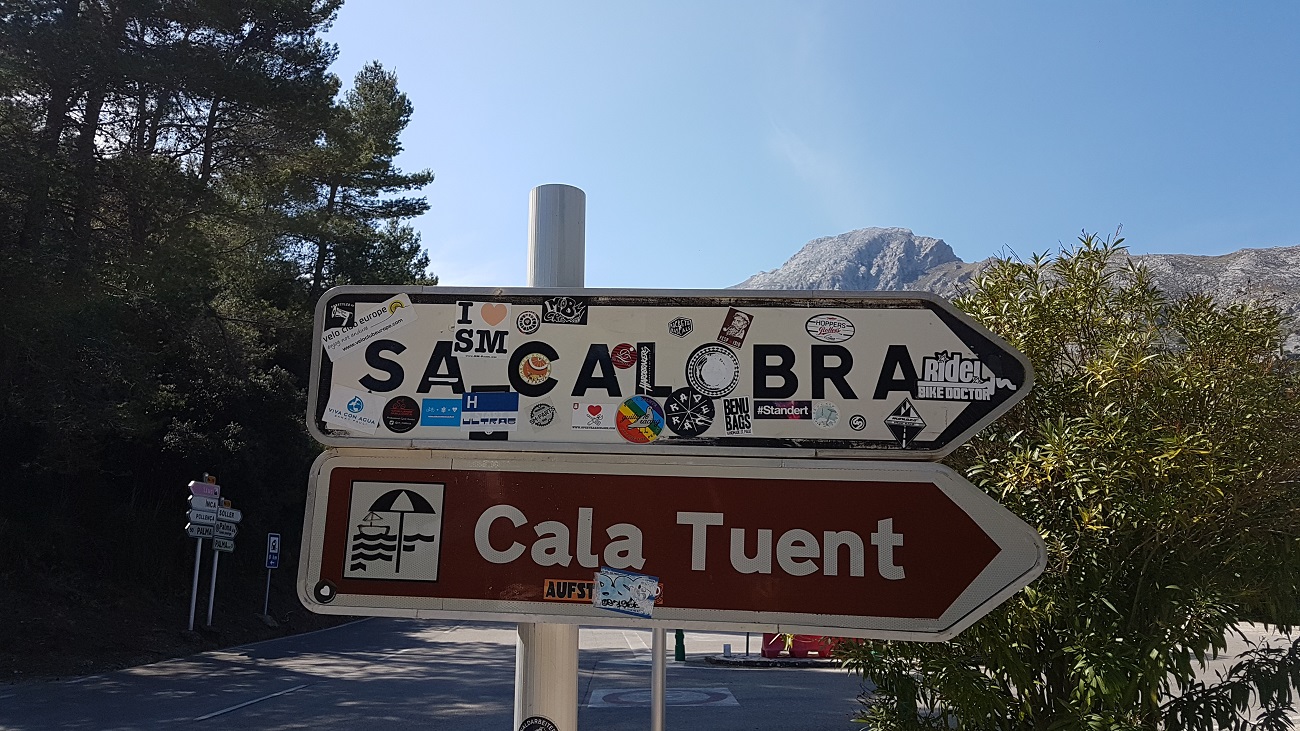 Coll dels Reis from Sa Calobra
An iconic climb which is on many people’s bucket list and is arguably the most looked forward to climb on the island. You have to climb the Col dels Reis first from the aqueduct before easing down to Port Sa Calobra then starting the main attraction of winding up from the small port on 10km of tar which seems to have just been thrown onto the side of the mountain. Mallorca Cycle Shuttle offers the Sa Calobra Express from Port Pollenca for those who with to ride the climb with fresh legs.

Port Valldemossa
A bonkers climb. The road is so narrow and bad and steep in places that you will question why you ever contemplated it, even started it. A third of the way down you will know – it is brilliant, a route like this this is reason enough to cycle. Amazing views that lead to an oasis of a Port that is so welcoming it is difficult to leave. A perfect place for a leisurely stop – just don’t eat too much as you have to climb out!.

Coll de Sa Batalla
Very scenic climb that starts in the town of Caimari.The average grade is 5.2 %, the length 7.9 km with a starting height of 166 m and a height at the top of 584 m. All in all an elevation gain of 418 m with a maximum gradient of 12 %. If you had to ride the same climb every day of your stay, this may be the one you would choose.

Coll de Femenia
Main entry point into the eastern Tramuntana. Another scenic climb, this one starts approximately 10km down a partly shady road out of old town Pollença. Sweeping, swooping corners allow you to maintain a good speed down this exhilarating descent. If you do manage to look around, Pollença, Port de Pollença, Alcudia and Port Alcudia are all visible at times as are dotted fincas way down in the valley. The appearance of the occasional stray goat has been known to cause additional adrenaline rushes.

Coll d’Honor from Bunyola
Is a category 2 climb of 5.4km with an average gradient of 5.9%, and is the more difficult way to enter the Orient valley. The height at the start of the climb is 200m and 550m at the finish, so a net gain of 350m elevation. There is a cheeky rise in gradient a few hundred metres from the summit.

Coll d’Honor from Orient
This is the easier way to climb the Coll d’Honor and is on the way out of the Orient Vally, down into Bunyola. As you are already at around 400m high, the ascent to the summit at 550m is not much further but involves some enjoyable hairpins and views back over the Orient valley.

Coll d’Orient from Alaró
From the town of Alaró you climb up and between the twin peaks of the impressive Puig’s – Puig d’Alaro and the Puig de s’Alcadena and descend into the town of Orient.

San Salvador
Located in the eastern part of Mallorca, San Salvador is a rather steep climb than normal for Mallorca, with gradients up to 15%. Starts near Felanitx, and finishes at the San Salvador monastery. 360 degree views of the whole island on a clear day.

Puig de Randa
Puig de Randa, also called Cura after the name of the monastery at the top, is the most popular climb in Mallorca not situated in Serra de Tramuntana. It is a place full of history, where Mallorca’s first hermitage was built in the 13th century. 360 degree views of the whole island on a clear day.

Coll de Sa Creueta from Formentor
Coll de Sa Creueta can be reached from two directions, Port de Pollença and Formentor, both category 3 climbs of almost equal length and gradient. Both approaches meet at the car park at Mirador d’Es Colomer viewing point, with the optional additional climb up to Talai d’Albercutx if required.

Coll de Sa Creueta from Port Pollenca
Coll de Sa Creueta can be reached from two directions, Port de Pollença and Formentor, both category 3 climbs of almost equal length and gradient. Both approaches meet at the car park at Mirador d’Es Colomer viewing point, with the optional additional climb up to Talai d’Albertux if required, and/or the choice to carry on to Cap Formentor lighthouse.

Coll de Soller from the South
This is the easier and quieter climb up to the summit of Coll de Sóller, but also the side more exposed to the sun. It is not uncommon for there to be more bicycles than cars.

Talaia d’Albertux
A very scenic climb starting at the final roundabout out of Port Pollenca on the Formentor road then turning right at the summit of Coll de Sa Creueta to continue up a number of hairpin bends where the views cover the bay of Pollenca and stretch to Cap Formentor and on a clear day to Menorca and the Spanish mainland.

Ermita de Betlem
Yes, it’s not in the Tramuntana, but it’s a great little climb and you can see the Tramuntana from it! Does that count? Anytime you go near the lovely little town of Arta or are in the Cala Millor area, this scenic 10km detour with little traffic is well worth the extra effort.

Puig Major from Soller
This is the hardest and longest side to climb up the highest mountain in Mallorca. The other much easier direction being from Lluc. The Monnaber tunnel marks the end of the climb from both directions. Many people include it on their longest ride of their stay, from Andratx or Valldemossa back to Port Pollenca.